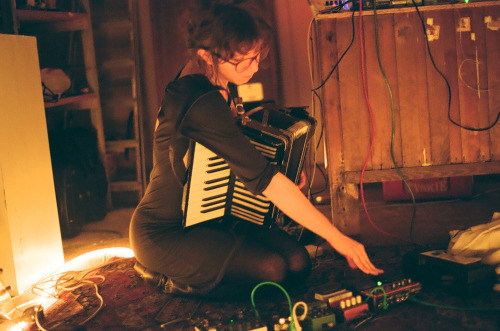 This week it’s a mix of solo music, collaborations, and exclusive first plays from prolific Berlin-based Italian drone artist DuChamp. She’s written a full-on and brilliant explanation for us below, after the tracklist…

Under the name of DuChamp there is an Italian scientist, musician and curator based in Berlin religiously devoted to drone. Drone is related to a precise childhood memory: the sound of the hair dryer, which my mother used to fix my hair. That was the sound of care, bliss, and infinite love. I use different instruments, among which accordion and baritone guitar, that I stratify using loops and delays. My first solo album “Nar” has been released on Apr 2013 from Boring Machines. In 2014 Idiosyncratics released the split tape “Sculpture” between the French sound artist Felicia Atkinson and myself. In October 2015 my latest tape “Nectere” was released by Full Body Massage records. I’ve also composed music for art installations (Avital Yomdin’s “it’s not a tickle, it’s a flood”), for contemporary dance (for Muck-Munoz) and live drawings (with Lara Schilling, that also did most of the artwork for my albums).

Although I play drone music as solo, I’ve almost immediately looked out to see if there was some companion to play with, in order to learn, be inspired, share.

I’ve met the New Zealand musician and writer Will Gresson (now based in London) when he was still living in Berlin, at his solo show. We bound together through common passion for Roy Montgomery and an idea of sounding memories. We formed Fausto Maijstral as trio in the beginning, but we soon became a duo, and we performed dense, intense mixture of drone, field recording (one of Will’s specialties) and musique concrète. We called our music the saddest in the world, because we were playing thinking about missing of unspoken things or distant memories. We released our debut album (self-titled) through La Station Radar in July 2014. Will moved to London after that, but we still play live and we are working on a tape, collecting material that we recorded through one year of practicing in my living room, called “The first five-year plan”.

Roman Catholics started as a joke. I’ve met through common friends Andi Stecher, Austrian drummer and percussionist, really into experimental music and improvisation: being that I’m Italian and he’s Austrian, the name Roman Catholics was fitting very good with our origins. At that time, I was listening to a lot of African music

and I get interested in polyrhythm, probably as a reaction with the fact I was playing music without rhythm (well, this just apparently). Andi also had a residency in Senegal where he played with very impressive percussionists, so we decide to start to project as a duo (Cian moved back to Dublin).
After a show, Inon from Full Body Massage records asked us to record something for a split tape with a drums/noise duo of improvisers from Jerusalem, Ensemble of Terror. Jonathan Strömer was so brave to record us in one day with his analogic 4-track (because we wanted to do from tape to tape, like ashes to the ashes) and the album has been released at the end of February.

Instant Voodoo is my latest music project, and it is the easiest one, as I’m playing with my partner (here with the nom-de-plume Concrete Mulligan). We wanted to do music together since longtime, as we both playing in bands, and we also produce tapes with Kitchen Leg records, but we never find the right configuration. We get a show for my birthday, and we decided to improvise freely with different instruments that are laying around in the living room…as violin, synths, bass guitar, autoharp, a bouzuki. The idea is to do something abstract, but with a kind of rhythm, to make sound collages, brief impressionistic pieces. We had in mind a lot Chrome when we recorded, a band of which we are massive fans. We still don’t know where we are going from, but we’re releasing on Full Body Massage in some months.

Other than this project, I play also in a girl no-wave trio called Xantene (with Muck Munoz and Saiko Ryusui) and I was part of the glorious weird pop band Brabrabra.

Living in Berlin of course gives me endless opportunities to play, perform, experiment, because of the tremendous number of great musicians living here, and the openness of the venues, and also the spirit of sharing and collaborating that lot of musicians have.

Nevertheless, I would feel insincere if I wouldn’t acknowledge the impact that had on myself as a person and as a musician the small city where I come from and the music community in which I grew up. I had (and still have) a group of friends (we called ourselves “the Fuzzamentos conspiracy”), and we share bands and practice rooms and countless number of shows. We were not that kind of people that just sit and complain about boredom in small towns, we were very active. The last band I had in Italy was called Klaus and Can-d, and it was myself at bass and voice, Alessio Bertucci (the person that did my baritone guitar) at voice and guitar and Daniele Curone at drums. We existed only for 6 months, but we had time to wrote delirious songs, record an album, plays lot of shows, and even tour in Croatia and in the Netherlands. It was a good time, and I’ve learn a lot from them, in term of writing songs, do shows, face problems, and so on.

Also, being part of a community, that also welcomed me as a musician without questioning my gender, that gives me the confidence to think that musically, if I want, I can do everything I want.